Explorers of the Simpson Desert

Some Facts and time scale on explorers

In the nineteenth century, the Simpson Desert was inhabited by 7 Aboriginal tribes, concentrated mainly around the watercourses on the desert boundaries. In good seasons, they moved into or through the desert itself, digging permanent wells along their route for survival.

European settlement and a rapid expansion of pastoralism on the margins of the desert, from 1860 to 1900, resulted in the displacement of tribes, either by direct occupation of tribal lands or the attraction of tribe members to pastoral properties. The worst impact, however, was the Europeans' introduction of influenza which decimated the tribes and depopulated extensive areas of north and north-eastern South Australia, including the Simpson Desert, at about the time of the First World War. Finally a severe drought drove the last desert inhabitants away.

Photo - Alfred Allen Simpson C.M.G., C.B.E., was the Chairman of Directors of A. Simpson & Son Ltd being a business that his father had started.

The first European to see the grandeur of the Simpson Desert was the explorer Charles Sturt in 1845, but the desert was not fully recognised and named until the 1930s when another Australian explorer and geologist, Cecil Thomas Madigan, named it after Allen Simpson, the sponsor of his subsequent expedition. 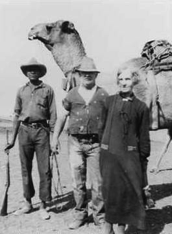 Notable among the early surveyors was Augustus Poeppel who located the junction of the borders of Northern Territory, Queensland and South Australia. The original peg marking Poeppel Corner, as it is still known, was removed to Adelaide for preservation in 1962 and replaced by a replica. Some of Poeppel's original mile posts and other historic markers can still be seen in the Park.

The first successful crossing of the desert is credited to E A Colson who, with an Aboriginal companion (P. Ains) and 5 camels, travelled from Mount Etingambra eastwards to Birdsville in 1936. The first motorised crossing, by geologist Reg Sprigg and his family, was completed in 1962.