If you are traveling along the Birdsville Track, keep your eye open for Milner's Pile south of Etadunna Station.

Milner’s Pile is as it implies, a pile of rocks on a small hill on the gibber plain. The cairn itself is a navigation marker built by Ralph Milner, a pastoralist who attempted the first droving of sheep from Adelaide 1860 to Darwin in 1871.

Following the path of explorer McKinley he reached Coopers Creek during a prolonged drought,  The Milner's were caught there for seven years, during which time his wife Phoebe (Phebe as shown on gravestone) died of *Dropsy illness and his brother John was later clubbed to death by Aborigines at attack creek (NT). 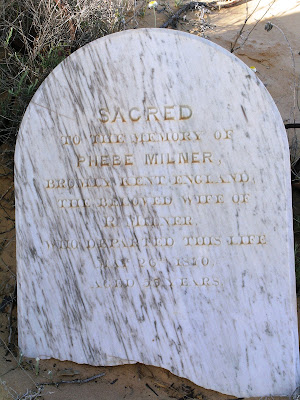 His Adelaide to Darwin droving was an attempt to win £2000 offered by the South Australia Government for the first drover to cross Australia.

The Milners started with 4300 sheep, 150 goats, 160 horses and two wagons. He lost 1500 sheep from poisoning around Devils Marbles in NT and sold 1200 sheep to the Overland Telegraph construction party at Roper River.

Eleven years later in 1871, Ralph Milner arrive at Darwin with 2000 head through lambing.

Due to a change of Government, Milner did not receive his £2000 award.

While at Coopers Creek, the Milner’s established Bucaltaninna station some 30km East of Milners Pile. (If you gain access via the Etadunna Station, part of the old station still exist.)

It appears that Phoebe’s death was due to heat exhaustion resulting in *Dropsy illness. The women of the mission care for Phoebe leading up to her death aged 55 on the 26th May 1868.  (The grave stone states date of death as the 26th May 1870)

In 1870 Milners set out again with stock following the newly installed Overland Telegraph Line tracks to Alice Spring. Milner provide meat to the workers from this point. Later that year he arrived in Darwin.

* Dropsy is an old term for the swelling of soft tissues most likely associated with congestive heart failure.

If you are traveling through this areas and wish to pay your respect for our outback pioneers, please visit the Etadunna Station and ask their permission to access the property and gain a gate key to visit the Killalpannina Mission.  Allow 2 hours. As always, leave gates as you find them.  Phone (08) 8675 8308

Click here to view key features and the locations of Etadunna Station and missions. 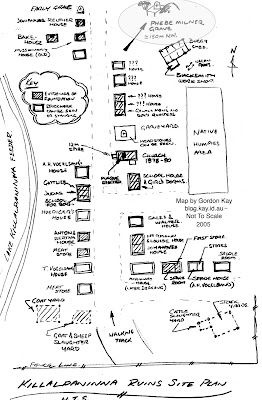